The Editorial Board of the journal “Bulletin of the Russian Academy of Sciences: Physics” monthly assigns one of the articles of each thematic issue the honorary status of “Editor’s Choice”. We hope that the selected articles will be of interest to a wide range of readers.

The work is devoted to the study of the features of the exit to the Earth’s surface of natural magnetospheric electromagnetic radiation of the auroral hiss type according to ground-based observations of electromagnetic fields in the very low frequency range (VLF, from hundreds of hertz to tens of kilohertz). Auroral hiss is one example of noise emissions whose field parameters change randomly over time. Research team from the Polar Geophysical Institute has developed a method for analyzing data from ground-based observations of this kind of radiation. This method uses the representation of the field parameters as their distribution densities, while other methods use the averaged values of the field parameters. To interpret the results of ground-based observations, a numerical model of the propagation of auroral hiss radiation from the generation region to the ground-based observer is developed. The model includes the following modules: 1) generation of electrostatic waves at altitudes of 10,000 – 20,000 km; 2) propagation of electrostatic waves to the region in the ionosphere occupied by small-scale inhomogeneities of electron concentration; 3) scattering into the exit cone of electrostatic waves on small-scale inhomogeneities; 4) propagation of scattered waves in the lower ionosphere and the Earth – ionosphere waveguide.

The paper presents the results of ground-based observations of the VLF auroral hiss at three spatially separated points, Barentsburg (Svalbard Archipelago), Lovozero (Kola Peninsula, Russia) and Kannuslehto (Finland). There were cases when auroral hiss was registered only in the observatory of Barentsburg and when bursts were recorded by all three stations simultaneously. Only the collaborative use of the developed data analysis methods and the propagation model of auroral hiss allowed them to show that the burst recorded in the observatory of Barentsburg is caused by the existence of a scattering area of small-scale inhomogeneities of electron concentration which is located to the southwest of the observatory. The registration of auroral hiss bursts at all three points is caused by the simultaneous existence of two scattering areas in the ionosphere located at different latitudes.

Collective fluctuations of charge density – plasmons, have been studied in two-dimensional electronic systems (2DES) for more than 50 years. Many theoretical and experimental works have considered these excitations in 2DES of various configurations, including those with strong shielding by a closely spaced metal shutter. However, it turned out that in 2DES, only partially covered by a gate, new plasma modes are excited that differ from those previously considered and investigated. Despite its prevalence in actually studied structures, this case has been ignored for a long time. In order to study this issue, experimental work was carried out on 2DES in GaAs/AlGaAs heterostructures, partially shielded by a metal gate. This manuscript concludes a series of papers considering different geometries of the hybrid configuration of a 2DES with a gate and a contact.

Two different geometries were investigated – a 2DES disk with a central gate in the form of a disk of a smaller diameter and a perimetric contact (Corbino geometry) and a rectangular 2DES with a gate in the form of a narrow strip and side contacts. The measurements were carried out using the experimental equipment of the Laboratory of Nonequilibrium Electronic Processes of the Institute of Solid State Physics of the Russian Academy of Sciences in a cryostat with a temperature of 4.2 K and down to 1.5 K under helium vapor pumping. To detect plasma resonances, a unique optical non-invasive technique was used based on the high sensitivity of the luminescence spectrum of two-dimensional electrons to the heating of the 2DES caused by the absorption of the microwave signal.

The paper presents the results of the observation of plasma excitations in the indicated systems, obtained curves of absorption of microwave radiation depending on the frequency and applied magnetic field, and plotted the corresponding dispersion and magnetodispersive dependences. It turned out that in a 2DES with partial shielding, a family of plasma oscillations is observed that is physically different from both ordinary unshielded plasmons and plasmons in fully shielded 2DES. In addition, when the gate and contact were electrically connected, a special low-frequency mode was observed, the properties of which depend on the connected external circuit. Thus, the studies carried out have identified plasmons in partially shielded 2DES into a special family associated directly with charge oscillations in the gate and near gate regions, also containing a “tricky” hybrid mode, frequency, magnetic field behavior and Q factor of which can be changed by connecting various external electrical circuits.

I.V. Dzedolik, Linear and Nonlinear Phenomena in a Flow of Surface Plasmon–Polaritons // Bulletin of the Russian Academy of Sciences: Physics, Volume 85, Issue 1, pages 1–7 (2021)

The paper is devoted to the dynamics of electromagnetic waves at the interfaces between two media, in particular, metals and dielectrics, due to the broad prospects of using composite materials in micro- and nanodevices of photonic and plasmonic technology. A high-frequency electromagnetic field causes oscillations of both free and bound charges in dielectric, semiconducting media, and metals. In this case, as a result of charge oscillations, secondary electromagnetic waves are emitted, which hybridize with polarization waves of bound and free charges in the medium and propagate in the volume of the medium, as well as along the interface between the media in the form of plasmon-polariton waves.

An external electromagnetic field of weak intensity causes a linear response of the dielectric constant of the metal. With an increase in the amplitude of the external field, anharmonic oscillations of electrons and ions, interband transitions appear, which lead to the manifestation of nonlinear polarization mechanisms. An intense electromagnetic wave or a powerful electromagnetic pulse generates nonlinear plasmon-polariton waves – cnoidal waves, kinks and solitons in the volume of the conducting medium and at the interface between the conducting and dielectric media. The properties and dynamics of cnoidal waves and solitons depend on the parameters of the exciting electromagnetic waves and pulses, as well as on the geometry of the system and the properties of the media in which plasmon polaritons are excited.

The paper presents the results of a theoretical study of linear and nonlinear processes during the propagation of plasmon-polaritons at a plane interface between a metal and a dielectric medium, depending on the boundary conditions and the energy density of the exciting electromagnetic wave. The analysis of the dynamics of plasmon-polariton waves was carried out by solving nonlinear equations obtained on the basis of a quantum hydrodynamic model for the Schrödinger equation, which allows one to consistently describe the physical mechanisms causing the nonlinear response of free electrons in a metal to the effect of an external electromagnetic field. It is shown that the profiles of the envelopes of the plasmon-polariton cnoidal waves and their periods are transformed when the source power and/or the conditions for the excitation of plasmon-polaritons at the interface between the media change. In particular, at a certain ratio of parameters, a shock wave in the form of a kink/antikink arises. Thus, by changing the power of the source of the external electromagnetic field, it is possible to control the period and shape of a nonlinear plasmon-polariton wave propagating in plasmonic nanodevices.

Artificial materials with functional properties depending on the topology are now widely used in various fundamental and applied fields of physics. Such materials demonstrate the dependence of electrical (topological insulators) or optical (photonic crystals) characteristics on the realized sample topology. In most cases, we are talking about the study of spatially periodic structures, e.g. quasicrystals and superlattices. At the same time, fractal systems that demonstrate the properties of scale invariance – self-reproduction/self-similarity of their structure in a certain range of scales – are of great interest. For structures of this type, problems arise that make it possible, on the basis of new physical principles, to develop elements and devices of photonics and optoelectronics with the implementation of quantum-size effects in macroscopic phenomena, e.g. due to the possibility of the formation of correlated states in nanoclusters. Within the framework of this work, the possibilities of laser formation of cluster systems on the surface of various materials are demonstrated, the processes of their formation are investigated, growth models are proposed, and surface states are studied.

The study makes it possible to control the electrophysical properties of thin-film structures, and to find the optimal values of their parameters depending on the topological features and the selected elemental composition. The proposed methods and models can be useful and promising for the development of thin-film elements and systems of nanophotonics and nanoelectronics based on new physical principles, for use in high-tech industrial sectors of industry.

Understanding the principles of Brownian motion of particles in solutions of macromolecules is the most important task for a number of scientific fields. In cell biophysics, one of these areas is related to the study of intracellular transport processes. Various macromolecular biopolymers, such as proteins, polysaccharides, and nucleic acids, occupy from 5 to 40 % of the volume of liquid biological media (in literature, this effect is often called macromolecular crowding), which has a significant impact on all biological processes occurring in the cell. Studying the parameters of the motion of particles and macromolecules in such conditions is extremely difficult since the details of this motion are hidden on the nanoscale. Modern experimental approaches are based on optical measurements, the research capabilities of which in relation to nanoscale objects have a number of significant limitations. Earlier, we proposed a new approach to studying the dynamics of Brownian particles. The approach is based on Mössbauer spectroscopy of nanoparticles dispersed in the studied medium and made on the basis of the 57Fe isotope. Due to the Doppler effect, the Brownian motion of nanoparticles leads to a uniform broadening of their mössbauer spectra. The diffusion coefficient of nanoparticles is directly related to the value of this broadening, which makes it possible to determine it experimentally. The time resolution of the proposed approach is determined by the lifetime of the 57Fe core excited state which is less than 10-7 s, which largely determines the uniqueness of the data obtained.

In this work, for the first time, the nanoscale motion under conditions of macromolecular crowding has been studied using the method of Mössbauer spectroscopy. In this task, we studied the motion parameters of nanoparticles with a diameter of 9 nm that are part of solutions with different contents of large-molecular BSA protein. It was shown that the availability of macromolecules in solutions with identical macroscopic viscosity slows down the average velocity of Brownian motion of nanoparticles in the nanosecond measurement range. This effect increases with the increasing concentration of macromolecules in the solution.

The Brownian motion of particles leads to a broadening of the lines of their mössbauer spectrum. The value of this broadening is directly related to the particle diffusion coefficient in the studied system, which allows us to determine its value by calculations (on the left). In accordance with the Stokes-Einstein equation, the values of the nano-viscosity were calculated from the set values of the diffusion coefficient. Even though the macroscopic viscosity of solutions with different BSA contents is identical, the actual viscosity experienced by nanoparticles depends on the concentration of BSA macromolecules (on the right).

Interest in R-matrix studies of reactions is attracted by the possibility of searching for new ones, refining the characteristics of known shells, and evaluating the cross sections of nuclear reactions from limited sets of experimental data. This work was initiated by the appearance of new experimental data on differential cross sections of the threshold reaction 9Be(p,α2)6Li*.

New 10B levels are determined and characteristics of states detected earlier are improved to supplement the EXFOR database. 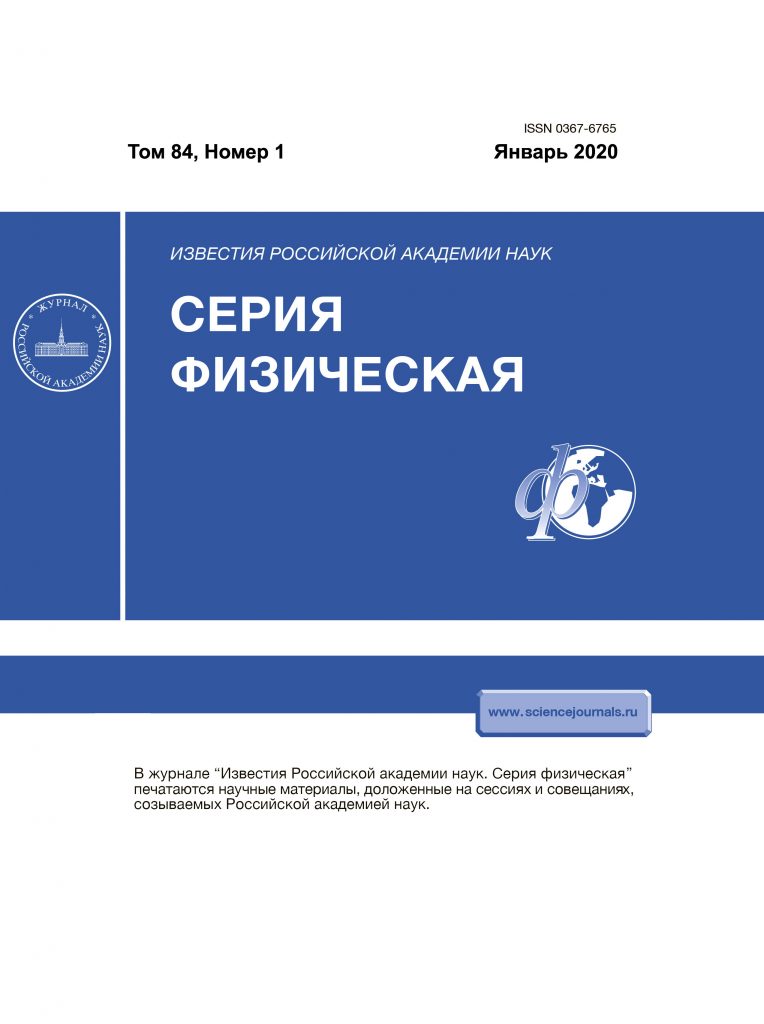 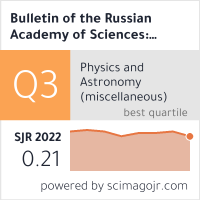